The Mental health facilities in Vietnam

Central-level institutions：There include the two National Psychiatric Hospitals I & II and the National Institute of Mental Health.

The capacity of mental health facilities in North Vietnam, there are 49 provincial facilities out of 31 provinces and indicated that the total number of inpatient beds was 4,525. The average ratio of inpatient beds per 100,000 populations was 10.7, but some poor socio-economic regions had the inadequate distribution. Three provinces had no inpatients beds, the patients with severe illness had to be referred to the nearby provincial or central government's facilities. There is no information about the community residential facilities, and the statistics of facilities/beds which reserved for children and adolescents is also insufficient.

Central and provincial psychiatric hospitals are the key organizations in providing inpatient services for the mentally ill patients. There is limited social care for severe psychiatric patients. National and provincial social affairs authorities provide a minimum life requirements, while large social protective institutions have almost no other services.

The supply and pricing of psychotropic medicines are regulated by the Vietnamese government, and all mental health clinics have psychoactive medications, including antipsychotics, antidepressants, mood stabilizers, anti-anxiety medicines, anti-epileptics, etc. Psychiatric hospitals usually hold enough pharmaceutical drugs, and 51%-80% of primary health care facilities have at least one type of psychotropic medicament.

Psychiatric diagnosis, psychotropic medication prescription, and inpatient mental health care may only be done at provincial and central levels, especially in the specialist hospitals. There are 11,000 commune health stations and 600 district hospitals, which have made a remarkable contribution to Vietnam's achievements in general health care, these facilities however have very limited capacity to respond effectively to the needs of the growing number of patients with mental illness.

This may be attributed to several factors as listed below.

(3). Insufficient skills and knowledge of health workers at district and commune facilities

(4). Lack of necessary drugs and equipment at health facilities

(6). Lack of linkages and integration between preventive and curative care

(7). Fragmentation in health service that prevents comprehensive and continuous care

There are currently no strategies concerning health promotion or disease prevention, and no community or primary care policies that address health issues. However, the government had brought in mental health issues in the five-year National Action Plan for 2006-2010.

Vietnam's healthcare is facing the main challenges, including overcrowding, shortage of medical staff, and outdated equipment in surgical operation and intensive care units. The  professionals in psychiatric hospitals in Vietnam are similar to the early development of psychiatric medicine in Taiwan, which most of them are based on general physicians and nursing staff. The others in the psychiatric medical teams, such as occupational therapists, clinical psychologists, social workers, etc., are to cultivate in the near future.

The major issues in Vietnam include

(4). Increase national investment to improve the quantity and quality of mental health system.

In 2014, Vietnam’s Psychiatric Association conducted a study to identify the 10 most common mental illnesses which affect the country mostly. The three most well-known issues were alcohol abuse, depression, and anxiety. However, further research should be needed to address these conclusions and to evaluate their causes. See the following table. 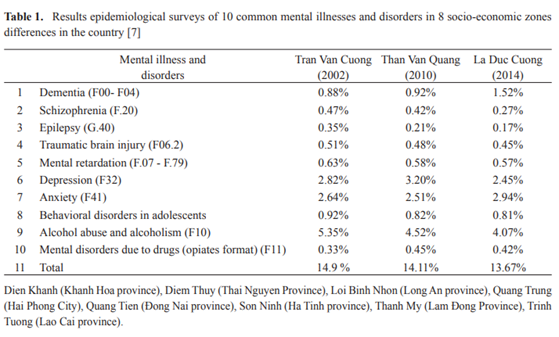 Mental disorders are sometimes imbued with shame and disgrace in the country, which can prevent individuals from speaking openly about their distress. For example, bác sĩ tâm thần is Vietnamese for psychiatrist; however, it is directly translated into English as "doctors who treat madness". These references are embedded with cultural stigma, implying those who seek psychological assistance are treating their obscenity behaviors.

A joint study between UNICEF, UNRISD, and MOLISA of Vietnam, in 2015, they surveyed the rural area of Dien Bien Province in northwest Vietnam and discovered 140, out of 333 attempted suicides, were 19 years or younger, and 16 out of the 73 committed suicides were children. Alarmingly, the survey found that suicidal tendencies were the pressing issue among Vietnamese youths in the province of Dien Bien. It's a problem that was never given much attention before. However, the surge in suicidal cases is a newly recognized concern, and more research is required to address the factors that cause adolescent distress in Vietnam.