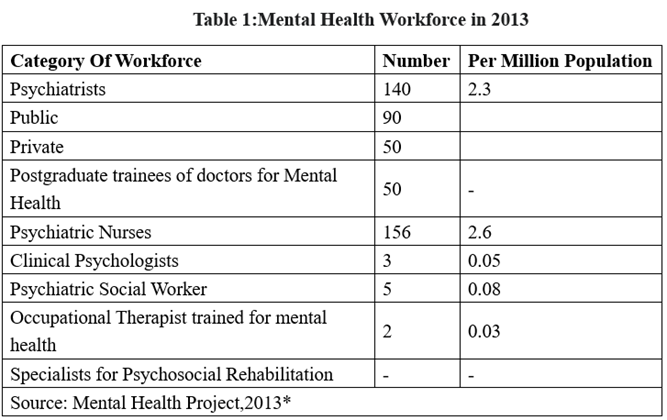 There are five civilian medical schools and one medical college. All medical universities in Myanmar offer the undergraduate MBBS degree (Bachelor of Medicine and Bachelor of Surgery), which is currently at the bachelor level. A 2017 research indicated that the academia in Myanmar has to cope with the lack of cooperation and help from the global academic community as well as the long-term scarcity of resources, expertise and political commitment domestically, all the civilian schools have been using the same curriculum that has remained virtually unchanged for decades. Basic sciences are taught in the early two years, and clinical training starts in the third year. The study at undergraduate medicine school is mainly didactic, and commonly encouraged in the way of rote learning. There is a lot of room for improvement in its medical education.

Since 1990, the World Health Organization (WHO) patronized the Mental Health plan, aimed to integrate of MH services to primary care. It is mainly to let the trained primary medical staff, the social, community, and the family support take care for mentally ill patients. The NGO or the trained medical staff members will provide mental health service, and almost 40% of the primary care units will be equipped with at least one trained professional. The secondary and tertiary care institutions are to provide mental health service from 2014.

Health Hospitals since 2012-13. Small amounts of drugs are furnished for primary care periodically by support of WHO. Administrative procedures for import and distribution of medicaments are controlled and regulated by Department of Food and Drug Administration, Ministry of Health. Antipsychotics (risperidone and olanzapine), anti-depressants (amitriptyline, and SSRIs), sedatives and hypnotics (diazepam, lorazepam, clonazepam and alprazolam) are included in National Essential Drugs List.

Nearly 75% of the MH budget is for mental hospital expenditures (WHO, 2011). MH services are provided primarily through two psychiatric hospitals, 22 psychiatric wards of general hospitals, and 35 outpatient MH facilities (WHO, 2015). Primary care physicians can prescribe psychiatric medications and have access to MH treatment manuals, but the majority have not received training on MH within the past 5 year. For every 100,000 people, only 0.6 trained MH workers (e.g., psychiatrists, psychiatric nurses) are available, and only 16% of these workers are in outpatient settings.

The World Health Organization (WHO) advocates for the integration of MH services into primary care and other community-based delivery platforms to improve access and lower cost. Data from the WHO resources indicate a lack of human resources for community-based therapeutic interventions within the formal healthcare system. The historical role of the psychiatric hospitals in Myanmar, impaired with the likelihood of prolonged hospitalization if committed, may reduce help-seeking behaviors. The use of informal service networks for MH care is not well documented, however, some anecdotal reports suggest that people in distress may receive counseling support in monastic settings and meditation centers. Most of the documented psychosocial and psychotherapeutic interventions have been provided by various non-governmental and community-based organizations, often by lay providers or community health workers.

There are two mental health hospitals; one is located in Yangon and the other in Mandalay. Mental Health Hospital, Yangon, is a 1,200 bed Tertiary Care Teaching Hospital, with an outpatient department, general psychiatry units, mood disorder units, schizophrenia units, alcohol de-addiction and research unit, drug dependency treatment and research unit, forensic unit, long-stay and rehabilitation unit, and community mental health unit. 18,922 patients were attended at the outpatient department and 11,289 patients were admitted to hospitalization in 2013.

Another is a 200 bed Tertiary Care Teaching Hospital in Mandalay, which is composed of a 100 bed general psychiatry unit and 100 bed drug dependency treatment unit. 6,959 patients were attended at the outpatient department and 2,379 patients were admitted to hospitalization in 2013.

Regarding mental health promotion, Sanofi and Myanmar Medical Association co-found together a Community-Based Intervention Program to increase the access to treatment, Pilot Launches in Yangon on World Mental Health Day.

The large burden of mental health (MH) problems on the country is not surprising. The Global Burden of Disease study in 2015 reports that in Myanmar both depressive and anxiety disorders are among the top 10 contributors to years lived with disability, and both have increased over the past decade.

In Myanmar, because of stigma and discrimination, many people still believe that mental illnesses are caused by evil spirits and still do not accept that mental illnesses are treatable. If someone becomes mentally ill or starts to behave strangely, he/she will be sent to the local healers or "Payawgasayas", and still remain untreated properly. Thus, the most important priorities are to establish a community mental health system, and to enact the mental health law. Next, in order to reduce the treatment gap, the limitation and scarcity of human resources, technical expertise, and funding are all the obstacles which need to be overcome, and to improve the access to mental health services.

The treatment gap based on treatment of psychoses (facility-based) is 95.8%. The most important priority is to establish a Community Mental Health Act which covers most areas of the country as soon as possible.

Limitation and scarcity of human resources, technical expertise, and funding are the obstacles to be overcome. In addition, stigmatization, discrimination, lack of knowledge regarding mental health, and poverty are also impediments to the access of the proper mental health services.

A Health Management Information System has been established in the country. There is the data on six common mental disorders (psychosis, anxiety, depression, epilepsy, mental retardation and alcohol dependency) which are collected by trained  health staff members working in rural health centers. See Table 2. 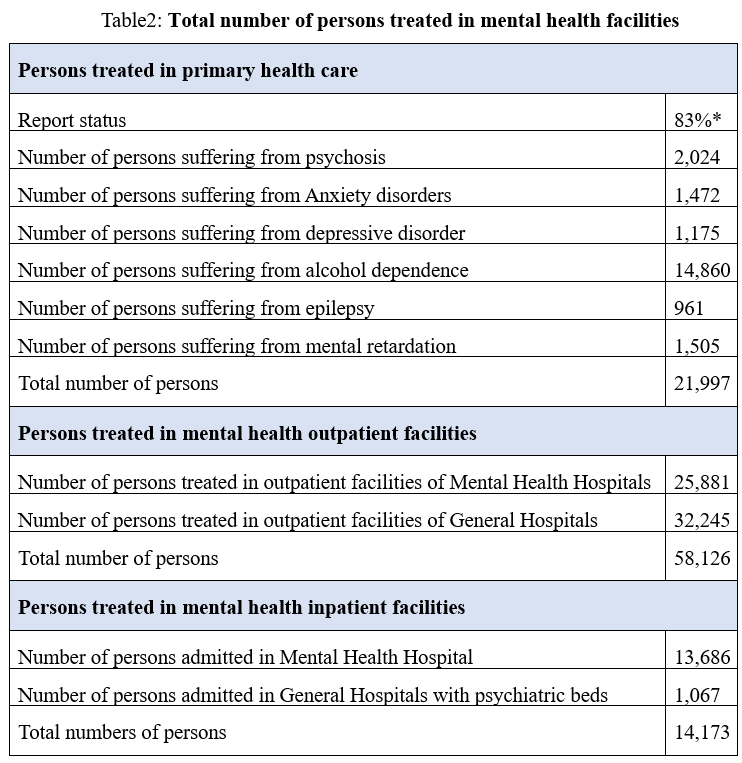